When a child’s sprain is not a sprain 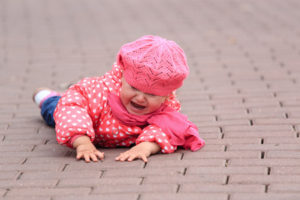 Is her wrist sprained or fractured?

Simply put, a Guilty Fracture is a childhood fracture that the parent/guardian doesn’t recognize as a facture. Consequently, treatment for the injury is not pursued right away. In my 25 year experience as an orthopedist, I have had parents put off coming to me for days, a week, or in one case, 3 weeks, only to learn that their child’s wrist “sprain” is a torus fracture.

What is a torus fracture?  A torus fracture, also called a “buckle” fracture, is an injury to a child’s bone where the relatively flexible topmost layer of bone (the cortex) gets compressed because of an injury. The sturdy and flexible compressed cortex often breaks (or fractures) in a buckle pattern. On x-ray, the bone looks “wrinkled”, or as it is known, “buckled”, rather than having its normal smooth surface. Usually, the bone ends of the buckle fracture remain together. However, in more severe cases, the buckle fracture has an angled appearance on x-ray. Occasionally, if the bone is sufficiently angled away from its normal position, it may require a push by the orthopedist, so it can be put back in place.

A buckle fracture can occur to any one of a child’s bones. One or both forearm bones are the most common sites of these fractures, accounting for more than 40% of all childhood buckle fractures. Also, three out of four forearm fractures occur at the end of the forearm, the wrist.

Buckle fractures often occur when children are playing on the playground or participating in sports. It frequently happens when a child takes a tumble and falls onto an outstretched arm.

In many cases the parent knows of the injury. The child complains of wrist pain, and is reluctant to move their arm. However, the parent sees no wrist swelling or other unusual appearance. Without any apparent evidence of a more serious injury, the parent explains to their child that it must be a sprain. It is only after a period of days or longer, that the parent suspects something more serious may be the problem and seeks the counsel of a doctor. When the parent learns that the “sprain” is a torus fracture, they feel guilty. This guilt is evident when the parent remorsefully explains their reasoning why it took so long to take the child to the doctor, that there was no outward appearance of anything wrong. It is then up to the orthopedist, usually as the cast is being applied, to explain that they are not the only parents (or caretakers) who’ve made that mistake. Occasionally, the doctor must give comfort to the parent, calming their fears that treatment delay has not caused irreparable harm to their child. That is the Guilty Fracture.